As students entered the Centre for Dialogue at Byrne Creek Secondary, there was an air of formality and a buzz of excitement that allowed only a hint of trepidation to show for what was about to happen.

They were about to start a Model United Nations committee session, which meant that public speaking, debating, critical thinking and leadership would all be expected momentarily. The goal of the next 3 hours would be to collaboratively resolve the longstanding issues of indigenous peoples around the world using UN protocols.

Ms. Angela Woolf, a longtime Burnaby teacher, was utilizing this teaching method for the first time. She had been inspired by a Pro-D Day workshop and her observation of one of the competitive 3-day MUN conferences held in a downtown Vancouver hotel. After further reading, planning and consulting, she was ready to introduce MUN to her students. 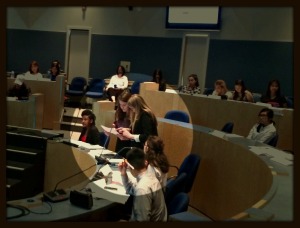 Each student represented one United Nations member state, so 50 in total were expected to answer the roll call process – with a placard to be held in the air! Next, came formal speaking in a “Round Table” format. Every country declared their position on the topic of “Rights of Indigenous Peoples”. So many countries had so much in common; territorial disputes, discrimination, sub-standard health care and poor treatment overall by non-indigenous peoples and governments. Actions by some of the countries were hampered by government policies that did not recognize some of the rights laid out in the UN Declaration on the Rights of Indigenous Peoples.

Finally, countries met with their allies to propose solutions to the major issues that had come up. An amazing resolution document resulted from the process – one that demonstrated student knowledge of the history and of UN principles and included all of the right usage of UN clauses as well. This group of students voted unanimously to accept the document which was full of positive steps forward for everyone.

Students were clearly engaged in the process and evidently had learned and retained the fascinating facts surrounding Canadian and the world’s indigenous issues. Ms. Woolf completed the process as a proud teacher enthusiastically endorsing the use of Model United Nations debate in the classroom.

Some people hear about Model United Nations and view it strictly as an extra-curricular event for a few students to take part in on the weekends. In light of the redesigned curriculum being introduced into British Columbia schools next year, Model UN can and should be considered a preeminent tool to achieve new curricular goals.

What is involved in Model UN, specifically? This paradigm for relevant education begins with students reading about the work of the UN and member states – global issues, writing from the perspective of one country, speaking about global issues such as human rights, poverty, conflict and hunger, listening and considering information presented from other countries’ viewpoints and collaborating to arrive at a number of realistic solutions.

Model UN as a teaching methodology is learner-centred, flexible and supports both deeper and cooperative learning. Additionally, participation in Model UN prepares students for a lifetime of learning where ongoing change is constant. Students who learn how to participate in Model UN-based activities report a higher level of engagement in their learning, motivation to pursue additional global-based learning and a commitment to working for a better world.

The relevance and significance of global education has always been subscribed to but the use of Model UN in schools represents a new-ish teaching paradigm, given that there will now be more time to pursue such an in-depth and holistic teaching methodology in the classroom rather than relying on students’ having time on weekends.