Climate change is one of the most serious challenges mankind has ever faced and has serious implications for the realization of human rights,” according to the United Nations High Commissioner for Human Rights Navi Pillay.

David Estrin, Senior Fellow at the Center for Governance Innovation agrees. He has spent 40 years immersed in environmental law, and he currently focuses all of his efforts on achieving climate justice. Mr. Estrin recently spent an intense hour sharing his expertise and experience with Alpha Secondary School students as the fourth in a series highlighting the work of the United Nations (UN) in this 70th year of the international organization’s existence.

Mr. Estrin was joined by Dominique Souris, completing her final year of a Bachelor’s degree at the University of Waterloo, and the 5th negotiator at the recent Paris Climate Summit for the island nation Seychelles.

But how are climate change and human rights connected? The rights to life, food, water, health, housing, security and self-determination are threatened by climate change. Populations who are already in vulnerable situations due to factors such as poverty, gender, age, minority status, and disability are most at risk.

Researchers have found that a hotter, more unstable climate is linked to personal violence, political instability and institutional breakdowns (including the collapse of governing institutions and whole civilizations).

David Estrin is a lead contributor to cases brought before the courts that challenge governments to fulfill constitutional and rights obligations to their citizens. International law does not provide avenues for people to force governments to act to mitigate climate change impacts, but concerned groups can take action within individual nations.

50 years ago, the notion that tobacco companies would have to post health warnings on its packaging did not exist. Today, it is inconceivable that the oil industry would not exist. Mr. Estrin and Ms. Souris remind us that attitudes and understanding can and do change. When will carbon-emitting industries be regulated out of operation? Will it take court action in all 193 nations of the world to disrupt the trajectory of climate change?

One action taken by the island nation of Kiribati is the purchase of land in Fiji to move 20,000 of its 100,000 citizens starting in 2020. These will be climate refugees, transitioning to this new location due to the rising ocean and the erosion of its shores. 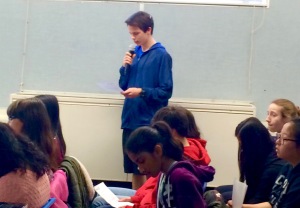 Previous global experts included representatives of UN agencies of Department of Peacekeeping, the World Food Programme, and the High Commissioner for Refugees.