New York City between December 14th through 18th registered below zero temperatures and so much snow fell that many flights had to be grounded. This didn’t stop two Burnaby students and their chaperone from taking part in a trip of a lifetime. 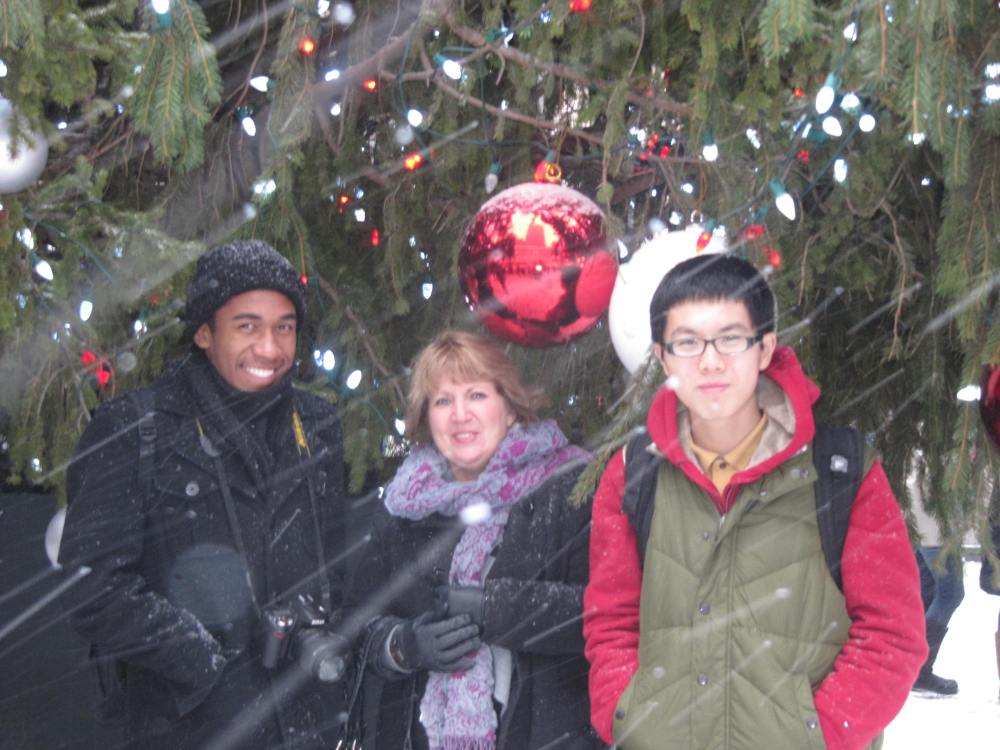 Hyunsoo Kanyamuna, a grade 12 student at Moscrop Secondary School and Frank Cheng, a grade 11 student at Burnaby North Secondary School landed just hours before the cold winter season got started in the Big Apple. The two had been selected to attend a prominent, annual conference organized by the United Nations Department of Public Information. Students from the United States, Mexico, France, the Democratic Republic of the Congo and Canada participated in a three-day exercise in global learning which challenged students to collaboratively prepare worldwide campaigns to achieve protection of human rights.

Visiting New York would be incomplete without a guided city tour, and Hyunsoo and Frank would not be disappointed. After rising to the top of the Rockefeller Tower, circling the Statue of Liberty by boat, and being inspired by Wall Street and the 9/11 Memorial and numerous other historical sites, the two began the next phase of their trip. Both students had been invited as billets into New York families’ homes – which happened to be in posh Manhattan hotels, complete with chauffeurs and room service. They would live like New Yorkers for a few days, arriving at the United Nations buildings with their new friends, and returning home each evening with them.

The world from the eyes of young people is a place in which to learn and to take action. The highlight of the trip for Hyunsoo included both the diversity of the assembled group  and the bright, ambitious individuals he came to interact with, allowing for dialogue from a variety of perspectives which elevated the quality of discussion. Frank remembers the process of creating an extensive action plan while at the UN. It had to be “realistic” and “modest”, but still have “impactful goals” to deal with the “extensive and atrocious human rights violations happening everyday – whether it be ethnic cleansing mass censorship, corruption and imprisonment, war crimes or denial of education”.

Heather Hart, Assistant Superintendent of Burnaby School District, and chaperone for the UNSCHR, viewed Hyunsoo and Frank as two of the top conference participants. “From my perspective,” she said,  “I believe the students were taken with the vastness of the UN, not only in terms of sheer size, but importance. They were also very proud of the quality of their research and they emphasized the importance of being well-prepared in advance of attending the conference. I believe we at SD 41 were well represented by our students.”

Dag Hammarskjold, a former United Nations Secretary-General, once said, “The pursuit of peace and progress cannot end in a few years in either victory or defeat. The pursuit of peace and progress, with its trials and its errors, its successes and its setbacks, can never be relaxed and never abandoned.” The UNSCHR, the contribution of Burnaby students to such endeavours, and their resulting appreciation of service for the greater good, are an important and valuable part of this work of the United Nations.

Frank and Hyunsoo, accompanied by Natasha Vlajnic and Amanda Lee of Moscrop Secondary School (who viewed the conference with other club members via videoconference) will provide an overview of their experiences to the Board of Education on February 11th at 7pm.